Dr. Sucheski is a board-certified ophthalmologist with a special interest in cataract and refractive surgery, including LASIK. He attended Pennsylvania State University, on a University Scholars Scholarship and graduated first in his major with highest distinction. He completed medical school at the Pennsylvania State University, Milton S. Hershey Medical Center in his hometown of Hershey, where he was president of the Alpha Omega Alpha medical honor society (given to the physician ranked at the top of his class). He completed his residency at the Wills Eye Hospital, where he served as chief resident in 1998.

In 2020, Dr. Sucheski is proud to have been chosen by Philadelphia magazine as one of the top doctors in Ophthalmology for the forth year in a row. 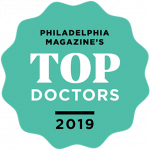 Both Dr. Sucheski and his wife truly believe in the safety of laser vision correction enough to have had LASIK and PRK. In fact, Dr. Sucheski has performed LASIK on many family and friends, including his brother, sister-in-law, and several doctor colleagues. He also is very proficient in cataract surgery, offering small incision, no stitch modern phacoemulsification surgery. He implants modern aspheric lenses or premium lenses in all of his patients to provide them the highest quality vision feasible.